The Annihilation Wave spreads across the Andromeda Galaxy, its huge fleets tearing apart civilisations and setting worlds aflame. Most of these worlds belong to the remnants of the Skrull Empire, now a collection of rival fiefdoms led by petty warlords. One such world is Aks’lo, formerly a idyllic forest retreat for the Skrull Empress, now under the control of Baroness S’Bak and her followers – and under attack by the Annihilation Wave.

As the Wave’s fleet engages with the Baroness’ ships in orbit, Kl’rt the Super-Skrull commands Skrull ground forces to repel the invader’s troops and protect the planet’s anti-air defences. Also in the battle is the Luphomoid warrior Spirit, who’s come to Aks’lo in her quest to find a glorious death. Meanwhile, the cosmic hero Quasar warps into orbit and discovers that the Wave fleet is protecting something massive – a starship the size of a moon on a collision course with the planet!

Spirit battles a Wave commander, who says (before she kills him) that the Harvester of Sorrow will destroy the entire world and everyone on it. Quasar flies into the core of the Harvester (the vast ship) and tries to absorb the anti-energy storm within it, but fails and is repelled into deep space. The Harvester attaches itself to Aks’lo’s atmosphere and fires anti-energy into the planet’s core; the Super-Skrull rallies his forces to their ships and escapes before the whole planet is converted to a mass of high-energy plasma. 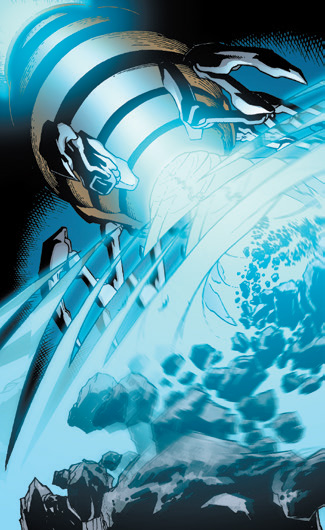 In the aftermath of Aks’lo’s destruction, the Super-Skrull is confronted by Baroness S’Bak, who tries to blame him for the loss of the planet; Kl’rt reacts angrily to her accusations and declares that he is done with working in the service of the Empire’s broken nobility, and will follow his own plans from now on. The Baroness’ staff tell her that Quasar is hailing them and requesting an audience, and that they have captured Spirit’s ship; both of them are brought to the bridge of her ship. Quasar argues that a united front is needed to fight back against the Wave, but the Baroness plans to retreat entirely from the conflict and look after her own fiefdom; with the help of Kl’rt, Quasar manages to convince her to reach out to her rivals and start forming allegiances.

While Quasar and Spirit stay with the Baroness’ fleet to help gather allies, the Super-Skrull decides that he needs intelligence on the Annihilation Wave and its super-weapon – and that means entering the Negative Zone. The best place to find entrance to that dimension: Earth, and the scientific genius of Reed Richards. The Baroness gives him a ship to make the journey, and assigns him an assistant – R’Kin, a diminutive Skrull engineer whose father once served under the Super-Skrull.

Ascendant campaigns can view previous versions of their pages, see what has changed (and who did it), and even restore old versions. It's like having a rewind button for your campaign.

We've already been saving your edits, so if you upgrade now you will have instant access to your previous versions. Plus, you have our no risk refund guarantee , so there's nothing to lose.

Annihilation - Session 2 The Fall of the Nova Corps

Annihilation - Session 1 Escape From the Kyln

I'm sorry, but we no longer support this web browser. Please upgrade your browser or install Chrome or Firefox to enjoy the full functionality of this site.