The Annihilation Wave is the name given to the massive invasion fleet from the Negative Zone currently attacking the Local Group of galaxies. It gains its name from its leader, Annihilus, as well as from its destructive power and tendencies – the fleet seems just as willing to destroy planets and civilisations as to conquer them (possibly even more so).

The Wave emerged from the Crunch and destroyed the Kyln as its first sortie against the positive matter universe. Tearing a swathe through the Andromeda Galaxy, the Wave launched an all-out attack on Xandar and all but wiped out the entire Nova Corps, leaving only Richard Rider to carry on its heroic legacy. As it continues its destructive spread through the universe, no-one know where the Annihilation Wave will strike next.

The Annihilation Wave is a vast fleet of semi-organic ships, a fleet so enormous as to dwarf anything fielded by the Kree, Shi’ar, Skrulls or any other intergalactic empire. Ships include swarms of fighters, gunboats, troop carriers, cruisers and frigates, as well as flagships the size of giant asteroids or small moons, all armed with lasers, radiation beams, larvae bombs and other weapons of mass destruction. Wave ground forces are mostly vicious and barely-sentient insectoid creatures armed with pulse rifles and guided by a telepathic hivemind. 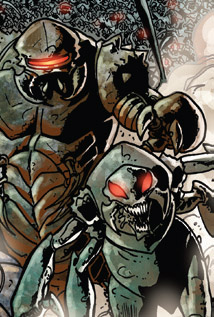