One of the most formidable entities known on any world, Thanos possesses limitless physical power and intellect. His grasp of technology and science and mysticism rivals the most amazing minds in the universe, and he can trade blows with Thor and the Thing simultaneously. Thanos’ pursuits have pushed him to the power level of a god, and transformed him to an immortal being above and beyond death.

Born a mutant Titanian Eternal, Thanos’ deformed visage and aggressive personality alienated him from other Eternals. Isolated from his peers, his fascination with death and destruction eventually made him leave Titan to embark on a path of technological and mystical self-improvement. He returned with an armada and slaughtered the Eternals, the first step towards his multiple attempts to conquer or destroy the universe. Thanos’ terrifying legend spread throughout the universe as he pursued one destructive agenda after another, always seeking the affection of Death herself.

Thanos has chosen to insert himself into current events, first by coming to an arrangement with the Proemial Gods that were apparently imprisoned in the Kyln and then by forging an alliance with Annihilus. His goals are yet to be revealed, but the first stage in his plans seems to be weakening or even destroying Galactus. 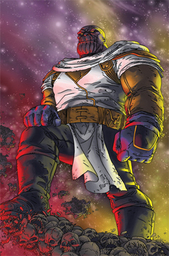