An android created by the Rigellians

Rigellian Recorders are a race of sentient robots created by the Rigellians, with the purpose to explore new territory and report back to the Rigellians. They possess greater-than-standard physical strength and durability, can interface with and even control many forms of technology, and have extensive knowledge of the Local Group’s many races and civilizations.

808 is a Recorder android created by the Rigellians as an explorer and observer. After spending many years acting on behalf of the Empire, it was recalled to Azimuth Station for servicing and upgrades. While there, it assisted Spirit and Quasar in their diplomatic efforts with the Skrulls, and gave some minor backup in their battle with the Seekers.

As a peace gesture, the Rigellians assigned 808 to Spirit as an envoy, to assist her in the efforts against the Annihilation Wave and to maintain contact with the Rigellian Empire. 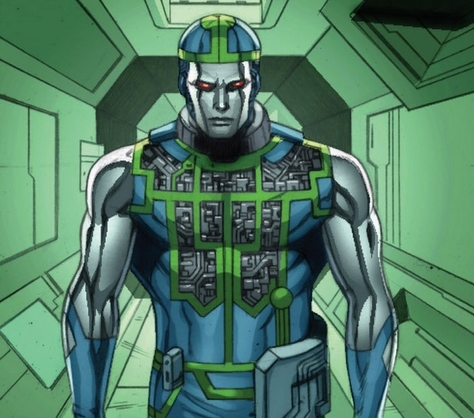