Cunning and powerful agent of the Skrull Empire

As a Skrull, Paibok is a natural-born shapeshifter, and also an experienced soldier and spy. The Warskrull augmentation process greatly enhanced his strength, stamina and durability. He can fly, he can turn his skin into a metallic substance and he possesses both bio-electrical and cold control powers.

An elite Skrull espionage agent, Paibok was chosen to act as a direct agent against the Fantastic Four. He underwent gruelling surgical and technological modification gain superpowers to use against enemies of the Empire. After a series of defeats, Paibok was exiled from the Skrull Empire, eventually finding his way back to Earth before being imprisoned by the Kree.

Imprisoned in the Kyln for his crimes, Paibok was in one of the artificial moons when an armada of impossible size and power emerged from the Crunch. He managed to escape thanks to a temporary alliance with Reed Richards and the Star-Lord. Later he tried to form a pirate crew with Nebula to take advantage of the chaos caused by the Annihilation Wave; those plans came to naught, and he was imprisoned once again.

Paibok is dedicated to the Skrull virtues of ‘might makes right’ and ‘power through treachery.’ He’s a loyal son of the Empire, dedicated to destroying its enemies and gaining personal advancement. He’s a cold-blooded killer and a cunning mastermind, pragmatic enough to see the occasional need for strategic withdrawal and acceptance of temporary defeats. 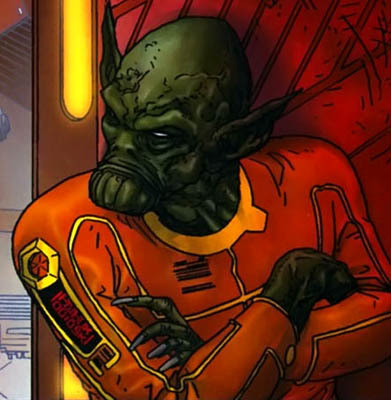