Billionaire playboy genius in a suit of high-tech armour

A brilliant futurist and engineer, Tony Stark has few intellectual peers. As Iron Man he wears a sophisticated suit of powered armor that he constantly upgrades and redesigns to keep at the cutting edge. The full capabilities change over time, but the suit always boasts a combination of force-field reinforced armour, sophisticated sensor suites, flight systems, strength augmentation and an array of energy-based weapons, such as repulsor blasts fired from its palms and a broad EM-spectrum unibeam unleashed from the suit’s chestplate.

Tony Stark was born into privilege and wealth that shaped him into both a jaded, cynical playboy and a successful industrialist. His worldview changed when he was wounded and taken captive while touring a war-torn area where Stark Industry weapons were being tested. From parts his captors wanted made into weapons, Tony cobbled together the first Iron Man suit and used it to escape. His eyes now opened, Stark had a change of heart and turned his focus toward helping humanity with his technology, and defending people from danger as Iron Man.

To assist peacekeeping efforts in Earth’s superhero ‘civil war’, Tony Stark and Reed Richards developed plans for a prison in the Negative Zone. When the Super-Skrull came to Earth looking for passage to the Zone, Iron Man joined Ms Marvel and Mister Fantastic on what he thought would be an enjoyable adventure in another dimension. One relative year later, they returned with a viral weapon that destroyed the Harvester of Sorrow. In the wake of that battle, Iron Man has gone back to Earth and prefers to stay out of cosmic affairs.

On the one hand, Tony Stark is a caring humanitarian who works tirelessly for a better world; on the other, he is a womanizer and recovering alcoholic who tries to bury his insecurities and fears in an endless parade of meaningless relationships or at the bottom of a bottle. Stark’s towering intellect carries with it immense arrogance; this makes him self-assured in his conclusions, but also hard-headed and more than a bit self-righteous. 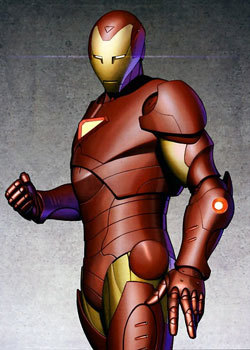