Re-shaper of reality and artist of conflict

Glorian can restructure pockets of reality by manipulating cosmic energies, allowing him to change the laws of physics, create energy from nothing, alter and reshape matter and open portals between locations, among other powers. His reality shaping abilities are powerful in scope but limited in range and effect, unless bolstered by the mental/emotional/conceptual energies of others. In addition, his body is impervious to harm and possesses superhuman strength and stamina.

Drawn to Earth, the transcendent alien device/being called the Shaper of Worlds found the radiation-poisoned and dying Thomas Gideon after a failed scheme against the Fantastic Four. Detecting Gideon’s psionic potential, the Shaper healed and mutated him, unleashing his reality control powers. After a period of training, the Shaper unleashed his apprentice on the cosmos to work his own art as Glorian.

Glorian chose the planet Godthab Omega as a canvas on which to work, telepathically urging its inhabitants into battle and drawing from the energies of conflict to fuel his powers. When Ronan the Accuser came to the planet, Glorian encouraged all-out battle between the local Kree and Gamora’s Graces to elevate his power even further. Once Ronan and Gamora realised what he was doing, they ceased their conflict and cooperated to shut down Glorian’s powers, forcing him to transform into a dormant state, a Cosmic Cube-like form called the Glorian Matrix. He may or may not still be aware within the matrix. 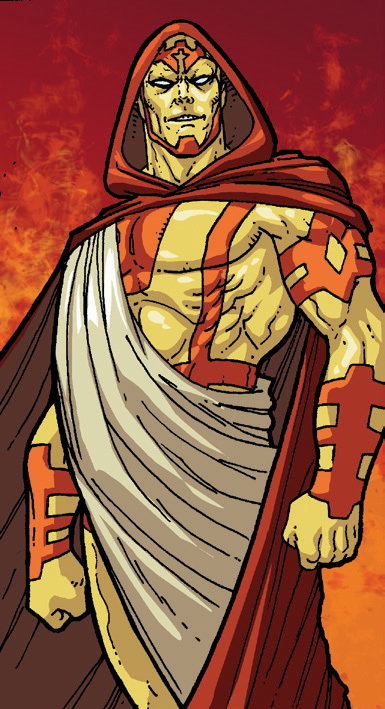