Former Herald of Galactus and wielder of stellar flame

Firelord manifests the Power Cosmic by wielding a flaming staff that projects blasts of stellar flame. The Power Cosmic provides Firelord with incredible strength, resilience and reflexes. Firelord is capable of space flight and can transport himself to other star systems and galaxies.

Pyreus Kril was a Xandarian Nova Corps officer who joined the service of Galactus to find what had happened to his best friend – Galactus’ former Herald, Air-Walker. Firelord served Galactus for only a brief time, later becoming a wandering hero much like the Silver Surfer, although he has also come into conflict with many of Earth’s heroes.

In the face of galactic disaster, Firelord has allied with Stardust and the Silver Surfer to investigate the threat the Annihilation Wave poses to Galactus and the Power Cosmic. Along with his Herald allies, he fought off Ravenous and the Seekers and uncovered the connection between Annihilus and the Proemial Gods. Galactus has been defeated and captured by the Wave, but Firelord still possesses his measure of the Power Cosmic and is ready to use it.

Firelord is blunt and provocative, speaking his mind regardless of how those around him might feel. No matter the cost, he does what it takes to win if he’s attacked. Firelord’s guilt for the loss of billions of lives while he was a Herald of Galactus drives him to stop other beings from preying on the innocent. 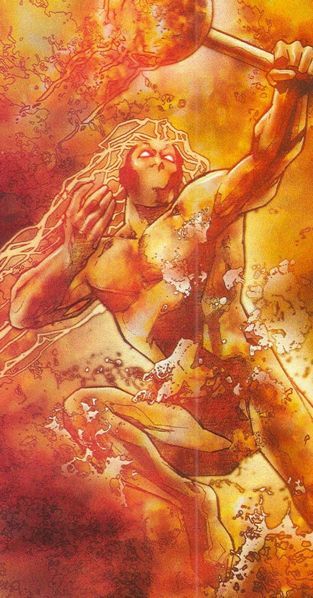