Armed with a battlesuit constructed from multiple galactic technologies, Devos is a walking arsenal. His battlesuit is equipped with an array of weapons including missiles, energy blasters, frost grenades, poison gas dispensers and vibroblades.

As his world’s finest warrior, Devos was selected for an experimental program that enhanced his natural abilities and was equipped with a powerful battlesuit. Determined to end all war, he decided this could only be done by destroying those races capable of it, starting with his own – he wiped them out and is the sole survivor of his species. His attempts to destroy all those capable of war have brought him into conflicts with the Skrull and Kree empires, as well as with the Fantastic Four of Earth.

Imprisoned in the Kyln for his crimes, Devos was in one of the artificial moons when an armada of impossible size and power emerged from the Crunch. He managed to escape after an altercation with Reed Richards of Earth and departed for sectors unknown, finally making his way to Azimuth Station. There he prevented Nebula and Paibok from destroying the station, and has (tentatively) been accepted as an ally in the United Front fighting against the Annihilation Wave.

Devos is a single-minded idealist who will commit atrocities up to and including genocide to further his goal of bringing intergalactic peace. He is willing to make alliances, but he inevitably will betray anyone strong enough to aid him since any potential allies are also capable of waging war. 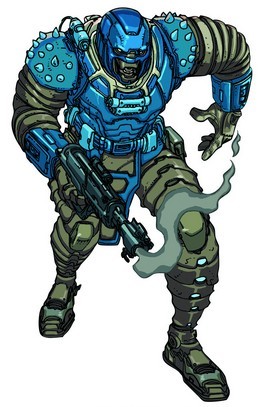