Cyborg alien hero and brother to the Asgardian gods

Enhanced by advanced Korbonite science in a time of desperate need, Beta Ray Bill is an incredibly powerful champion created to be the protector of his entire race. He has the strength, fortitude and skill of a true Asgardian warrior. His hammer Stormbreaker is an enchanted weapon that allows Bill to fly, summon storms, use Asgardian sorcery, deflect attacks, fire blasts of energy and open dimensional rifts.

With Stormbreaker stolen by Annihilus, Bill has armed himself with Jarnbjorn, a mystic axe used by Thor in his youth. Jarnbjorn lacks the magical enchantments of Stormbreaker, but is sharp enough to cut through the hull of a starship or the blasts of an energy cannon.

After their home was destroyed, the Korbonites transformed their champion, Beta Ray Bill, into a super-powered cyborg and tasked him with finding them a new home. When travelling through Earth’s solar system, BIll encountered the Asgardian god Thor; they fought at first but then became allies, and Odin gifted Bill with Asgardian might as well as his own hammer, Stormbreaker.

Bill is one of the bravest, most upstanding warriors in the Universe. He is honourable, loyal, and surprisingly humble for an alien thunder god. He shares his hammer-brother Thor’s tendency to take too much onto himself, often views things in simplistic terms, and has a bit of a temper.

Despite earning the powers, dress and friendship of Asgard, Bill’s first loyalty is still to his own people, and thus he was sent home by Thor to prevent him from dying in the final battle of Ragnarok. There he faced his insane predecessor, Alpha Ray, in a fight which so weakened him he was unable to prevent the new Korbonite homeworld from being consumed by Galactus.

Now Beta Ray Bill is alone in the Universe, the last of his kind, having lost two entire races. He roams the Universe in Skuttlebutt, his sentient starship and only remaining friend, protecting the weak and punishing the unjust where he can, and trying to keep the memories of two once-mighty civilisations alive. When he stumbles across a wrecked ship whose distress call to the Nova Corps has gone unheard, it seems he may have found a new purpose – but will this new threat prove to be too much for even the might of Beta Ray Bill? 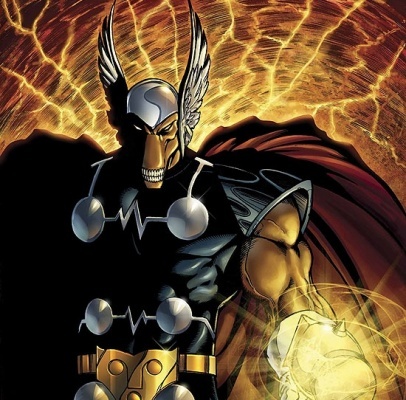