A warlord ruling over a fraction of the shattered Skrull Empire

Baroness S’Bak commands a territory of half-a-dozen planets, enforcing her rule with the aid of a fleet of starships and an army of Skrull soldiers. She is an experienced and highly intelligent political wheeler-and-dealer, and capable of holding her own if placed in danger.

Baroness S’bak is a ruling member of a powerful Skrull noble house who uses her political skill and alliances to keep her domains stable in the face of repeated turmoil and upheaval.

A ruthlessly practical commander, S’bak is resolutely unwilling to risk her station and power for anything less than certain victory. She has little respect for those who have failed the Empire in the past, especially the Super-Skrull.

After Aks’lo was destroyed, the Baroness planned to pull back into her territories and wait for the Annihilation Wave to pass by. Quasar convinced her that a united front was the only way to protect her fiefdom from the Wave. She has now formed an alliance with a number of other Skrull warlords, and with Rigellian forces as well., and lends their aid to the United Front. 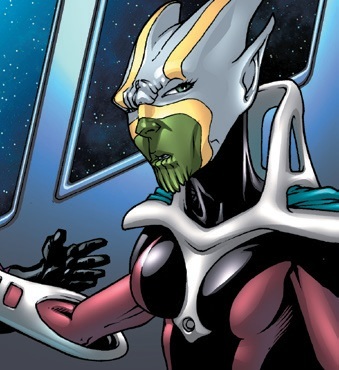