Lord of the Negative Zone

A hyper-evolved Arthrosian mutate, Annihilus possesses incredible strength, speed and resilience, and can fly on insectoid wings. These abilities pale before the power of his Cosmic Control Rod, which can be used to channel tremendous cosmic energy. Annihilus uses it to absorb sources of power, shoot energy blasts, travel throughout the Negative Zone and much more.

Millennia ago, an ancient and advanced race known as the Tyannans explored the Negative Zone, seeding planets with life. One Tyannan scout ship crashed on the planet Arthros, leaving spores that evolved into the insectoid Arthrosians. When an intelligent Arthrosian discovered the wreckage, he gained control of the ship’s technology and used it to enhance his body and mind. Now called Annihilus, he created the Cosmic Control Rod to give him the power to destroy, enslave, or conquer the worlds of the Negative Zone.

After multiple clashes with the Fantastic Four and a number of other Earth-based forces, Annihilus consolidated his position of power within the Negative Zone at some point. Under his ruthless command, the worlds and species of the Negative Zone have come together to form a massive fleet – known as the Annihilation Wave – that is now invading the positive-matter universe.

After a battle with Nova Prime and Beta Ray Bill at Nycos Aristides, Annihilus and his flagship were thrown back into the Negative Zone – but not before he stole and usurped control over Bill’s cosmic hammer, Stormbreaker. Annihilus has now made his way back to this universe, and started an alliance with a villain whose power and evil may be even greater than his own – Thanos, the Mad Titan. 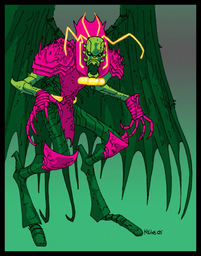