In which everything seems to happen all at once

The Silver Surfer, Firelord and Mister Fantastic enter the Negative Zone via the portal in the Baxter Building on Earth, then travel through it to exit via the Crunch into the space controlled by the Proemial Gods. They find the Gods building their Oblivion Engine – a dark energy device the size of Jupiter that they’ve used to trap Galactus within Thanos’ world-killing weapon, and which they plan to use it as part of their plan to rebuild the universe in their image after Annihilus destroys all life.

The heroes examine the Engine, but the Gods ignore them (although Nebula attacks the interlopers); the mortals are just too insignificant for them to notice. However, this changes when they use Mister Fantastic’s space-time deconstructor to damage the device, and they attack. Their power is overwhelming, but the heroes realise that the Gods can be hurt by the anti-energy of the Crunch; they tap this, and the deconstructor, to shut down the Engine and repel the Gods. The barrier around the Crunch dissipates, as does the energy trap around Galactus, allowing him to be released, and the heroes barely escape as the Engine breaks apart.

Meanwhile, in the Milky Way galaxy, United Front forces (led by Quasar, Nova Prime and Beta Ray Bill) track the main Annihilation Wave fleet to the Epsilon Eridani system, only 10 light years from Earth. While their allies draw fire, the three heroes locate and infiltrate Thanos’ ship to free Galactus. The ship is defended by Wave troopers, as well as Ravenous and the enslaved Gladiator, but the heroes manage to overcome them in a titanic battle – only to come face-to-face with Thanos.

However, they manage to persuade the Mad Titan to betray Annihilus by sharing the maniac’s plan to destroy all life in the universe, as that’s something Thanos wants to do himself. Thanos teleports away as the dark energy grids around Galactus fall, and the heroes deactivate Thanos’ tech and free the Devourer. Furious at his imprisonment, Galactus teleports away to battle the Proemial Gods – but not before the heroes persuade him to draw energy from the local planets and uses it to destroy the entire Wave fleet in a huge cosmic explosion!

But the battle is not done – even though the majority of the Annihilation Wave is now dust, Annihilus manages to escape in his damaged flagship and is headed for Earth!

The heroes regroup on Skuttlebutt and cannibalise some of Thanos’ tech to soup up Beta Ray Bill’s ship, then give chase. They manage to intercept Annihilus’ ship close to Earth and force it down on the Moon – but this isn’t enough to stop the Lord of the Negative Zone. The heroes take on Annihilus and his surviving minions in a massive battle in the Blue Area of the Moon – a battle where Beta Ray Bill reclaims Stormbreaker, the Cosmic Control Rod is destroyed and Annihilus is killed once and for all. 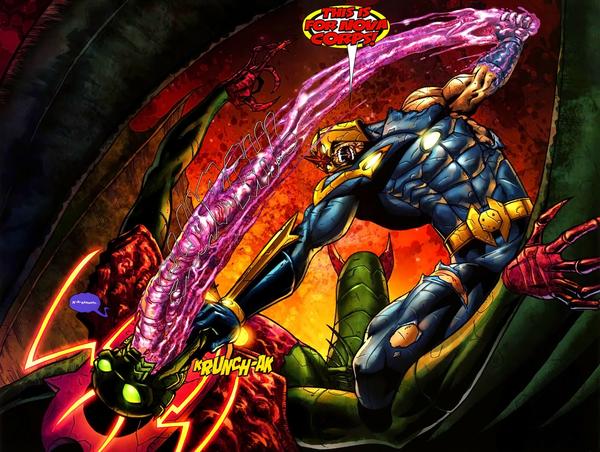 The Annihilation Wave invasion is over.

In the aftermath, the empires of the Unified Front establish a new political status quo, one shaped and influenced by the heroes that saved the universe. They must also forge some kind of peace treaty with the surviving forces of the Annihilation Wave, led by Ravenous, who want territory of their own in the Andromeda Galaxy in exchange for ceasing all hostilities.

The Skrulls are more fragmented than ever, and tensions mount between factions headed by Baroness S’Bak, Paibok and the Super-Skrull. The Shi’ar maintain Azimuth Station as an armed redoubt to monitor the Wave remnants in the Andromeda Galaxy, but many suspect they plan to use this as an excuse to claim territory of their own. Ronan remains as regent of the Kree Empire, waiting for the Supreme Intelligence to grow a new host, while the Xandarian Worldmind begins forming Nycos Aristides into the homeworld of a new Nova Corps.

Alliances start to fray; intrigues begin to form; new dangers rear up from the chaos.
But still, the invasion has been stopped. The universe is safe again.
For now.