Back in the Game

On the edge of the shattered Skrull Empire, the Heralds of Galactus – Firelord, Stardust and the Silver Surfer – stumble across a force of Annihilation Wave ships while searching for signs of the Proemial Gods. They easily defeat the Wave, but find no sign for the Proemial Gods, other than a thin trace of energies in one ship – along with a trace of the reality-warping energies of the Glorian Matrix. Suspecting a connection between the Wave and the Proemial Gods, they begin tracking the movements of the Wave through the Andromeda Galaxy. Meanwhile, Galactus decides to slake his hunger in far-off parts of the galaxy, far from the threat of the Wave or their allies.

Nebula tumbles through hyperspace, trapped in a sphere of burning cosmic energy that she was bound into by Firelord after her attempt to destroy Azimuth Station. Suddenly the sphere comes to a halt – plucked from hyperspace by the hand of Tenebrous of the Darkness Between. The Proemial Gods examine their captive and wonder what to do with her, while Nebula tells them of her hatred for Firelord, Galactus, her former allies, the galaxy and existence in general. Inspired by her hatred, and the concept of having a mortal agent, the Proemial Gods imbue her with a fraction of their own power, making her their Herald. 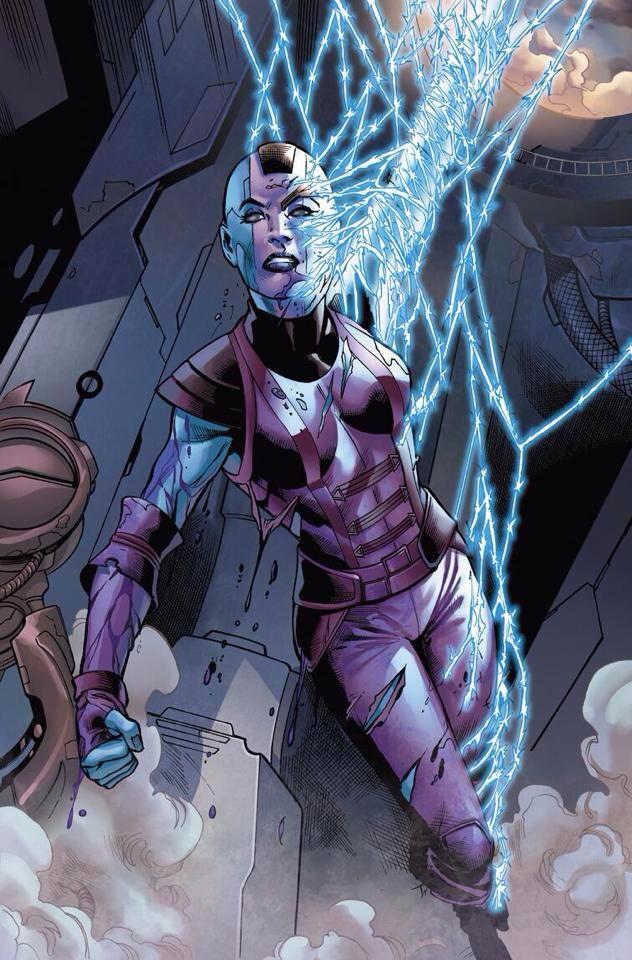 On Nycos Aristides, deep within the Kree Galaxy, Nova Prime moves the Xandarian Worldmind from his own consciousness into the information network of the Aarkonian colony, while Beta Ray Bill finally succeeds in mystically conjuring up an Asgardian weapon – Jarnbjorn, the axe Thor wielded in the age before he took up Mjolnir – to replace his stolen hammer Stormbreaker. Perhaps just in time, as a Kree ship approaches the misplaced colony – which turns out to be Ronan the Accuser, accompanied by Korath the Pursuer and his Kree Starforce soldiers. Ronan confronts Tana Nile, demanding the truth of her involvement with his trial for treason and exile from the Empire. Korath is looking for the Glorian Matrix, and his psionic tracking abilities tell him it’s somewhere in the Kree Galaxy. By accessing the Worldmind’s star charts, he realises it’s on Hala, the Kree homeworld. Tana Nile tells Ronan she framed him on the order of her Rigellian masters, as part of an agreement with the Kree mercantile group House Fiyero, who now govern the broken empire from Hala. The two Kree warriors depart for their homeworld to finally get answers – accompanied by Nova Prime and Beta Ray Bill, both keen to take the fight back to the Annihilation Wave.

Concerned by the fragility of Azimuth Station, and the continued danger posed by travel through the local stargate to Shi’ar controlled space in the Kree Galaxy, Gladiator decides the best course is to annex the station, throwing out all its inhabitants and turning away all refugees, and converting it to a military outpost. Quasar and Spirit attempt to talk him out of it, and note that the station is actually Rigellian property. When pressed about the ownership of the station, Recorder 808 drops his ‘bumbling butler’ routine to reveal that the Rigellians have been continually monitoring all activity on Azimuth, and that there are hidden defences and weapons that can be activated if required. Spirit and Quasar broker a deal in which the station is sold to the Shi’ar, while all refugees and inhabitants are moved to the nearby supply planet, which will be made fully inhabitable and accessible with Shi’ar assistance. Quasar joins the terraforming effort, while Spirit joins Praxagora and the crew of the UX-73, which sets off to find and battle the Annihilation Wave.

Annihilation - Session 16 The Fall of the Giants

Annihilation - Session 15 The Battle for Hala