As the dust of the collapsed mine settles over the UX-73 Prison Planetoid, Iron Man tries to salvage what he can of their ruined spaceship while Mr Fantastic and a wounded Ms Marvel strike out for the centre of the complex, where escaping prisoners clash with armed and merciless guards.

Meanwhile, the Super-Skrull rampages through the prison complex as the sadistic Commandant Hawal rallies its defences – pausing only to taunt the captive Praxagora, whose fusion core heart has been powering the prison for years. But the Skrull damages the containment facility, and Praxagora is finally able to break free – and to contemplate revenge.

As Ms Marvel brings down guard towers to stop the fighting, Mr Fantastic stretches to the heart of the prison and gains control of its fading power systems. Praxagora chases Hawal to the stardock at the rear of the planetoid; she captures him and clashes with the Super-Skrull, who wishes to torture the Athrosian for the secret of how to destroy the Harvester of Sorrow. 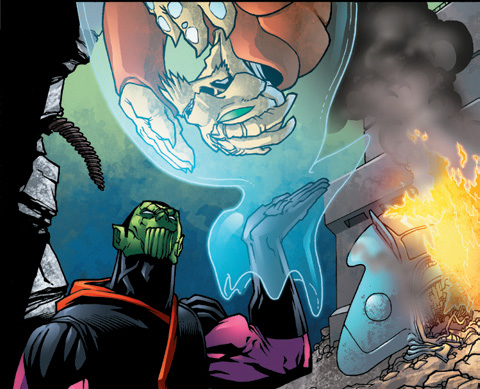 Praxagora persuades Hawal to cooperate, and the scientist-warden reveals that the Harvester is a vast cyber-biological organism; the only way to defeat it is to infect it with a virus, delivered by a missile – but such a weapon will take months to create. The heroes realise that their best bet for assembling the missile is to remain in the Negative Zone, where time passes some 10-12x faster than in the positive matter universe. So long as they can defend themselves against Annihilus’ forces, and rally allies in local space, they may just have a chance to build their weapon, pass through the Crunch and cripple the Annihilation Wave…